On Wednesday the 26th of February staff from across Dublin City Council took to Twitter for our first ever tweetathon.  The objectives for the day was to engage with the public in a different way, to allow staff to share the work they do on a daily basis and to highlight the variety of services provided by Dublin City Council. The response we received from both the public and staff far exceeded our expectations – #MyDCCDay had over 1,334 mentions from 500 unique authors and we reached a potential audience of over 3 million.

The idea for #MyDCCDAy came from a similar initiative in the UK – #ourday. Mary and I first heard about it a few months back through Dan Slee, Communications Officer in Walsall City Council. This was a great initiative as it provided the public with an insight into what local Government do over a 24-hour period. This was done through an engaging channel and we thought we would like to try this out within Dublin City Council.

Our first tweet was published by our Drainage Crew at around 4.00am and the stream continued until the late evening. All tweets were sent from various official Dublin City Council accounts, personal accounts and from two temporary accounts that were set up for the day @MyDCCDay1, @MyDCCDay2. 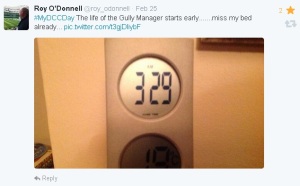 Roy O’Donnell and the gully maintenance crew were the first ones tweeting from very, very early

The most shared tweet of the day was this. It was retweeted 42 times and had 45,503 potential views. 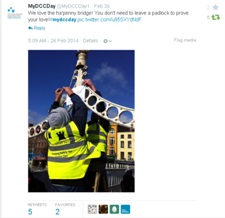 And this one was the one with the largest potential reach (over 65,000).

We would like to thank everybody who got involved when we approached them in relation to #MyDCCDay and to those of you who jumped on board on the day itself. To Ann Ivory and Brendan Ralph from our Web Unit and Anthony McGuinness from Dublin.ie, who supported us from the very beginning.

Good bye for now! The gong in Rathmines library is telling us it’s time to go!

Time to call it a day!